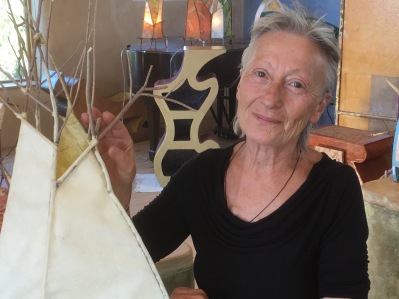 Clôdie François is a French native, born in Paris, graduated in Literature & Psychology from the Sorbonne University. Clôdie began her artistic path teaching painting & literature classes in french high schools. These roots were just the beginning of a rich and beautiful life, embracing new experiences and challenges with creativity and inspiration.

Throughout her life, Clôdie has always found an “inner temptation” to follow multiple paths of creativity, each medium a new love.

Clôdie worked 15 years as a journalist for the daily newspaper “Liberation”. Meanwhile, she was also involved in theater arts, her first passion, both on stage and backstage, as director, actor, and singer. She is the co-creator and singer of a band called BB Opera.

Clôdie crossed the Atlantic from France for the first time in the nineties bringing along her two young children to discover the “Land of Enchantment” in Ojo Sarco New Mexico. It was a “coup de foudre”.

Living in the wonders of Northern New Mexico has had profound effects on Clôdie as an artist. Today, she continues to find inspiration for her works in the faces of mountains and the iridescent sunsets.

Reinventing and refreshing your home

A rockin' dance band out of Taos, NM that plays an eclectic mix of dance music.

The latest news on WordPress.com and the WordPress community.

Apps for any screen

mosaics hard and soft; making peace with the pieces

Discussions and ideas about art and textile art

A motorcycle journey on my BMW

Supporting artists along the High Road to Taos